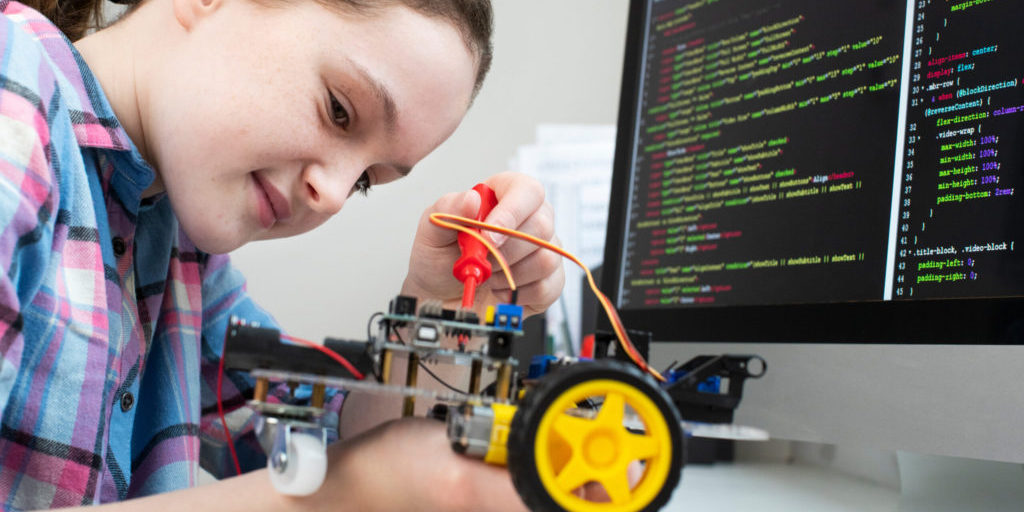 There are a handful of coding languages that will help kids have fun with coding and Python programming tops the list.

From building online stores to managing complex databases, coding in Python is the best step your kid can make.

Kids grasp things pretty fast and coding in Python would not have been a Herculean task. To be honest, the future is Python. Python programming is one of the few languages that will help kids have a successful future.

MS in Computer Science has various specializations out of which Python happens to be a prerequisite for two of them.

With the degree under their resume, your kid will find great job options to choose from. Here are the top three high-paying jobs roles your kid can choose:

Python 101: What is special about this language?

In layman’s terms, Python is a simplified programming language capable of executing complex operations. Unlike other languages, coding in Python is fast and easy to understand because of the simple syntax it follows.

The simplest language, ever

From the basic assembly language to the high-end computer coding languages online, everybody has their preferences. But everybody has to start somewhere and the perfect choice for kids is to start with Python. Why?

Well, it is pretty simple. Python is simple yet engaging. This is a major reason why it is included in the STEM activities for children to develop critical problem-solving skills.

When children start programming with a basic language like C, they get puzzled when they see these terms: void main(), printf(“%d%d”,&number,&answer). This is a guaranteed turnoff, kills their confidence, and they will never think about computer coding again.

Kids find coding in Python as a piece of cake as it takes care of all the technical adjustments by following a simple syntax.

Python Programming is Faster than any other Language

This Slovakian study states the only language that is fit to be included in a school curriculum is Python. This isn’t a surprise. When you compare with other languages, kids find Python to be easy.

When something is easy doesn’t mean that it offers little value. In fact, Python stands apart for being faster and more efficient than its counterparts.

When kids build projects in Python, they will rarely get tangled with debugging errors. This is because of the ocean of libraries that Python has that makes things easier to interpret.

These libraries help kids to swim through their program, handle simple errors that pop up, and understand a lot when they build projects in Python.

Python has spread like a virus to many of the top industries and no wonder even kids are coding in schools these days. Some of the fields where Python is flourishing are as follows:

Apart from these, Blockchain, language processing in Artificial Intelligence, and Neural Networks are other interesting areas for kids to dive in.

How early can they start?

Well, Estonia started this for their first-graders, setting an example that coding in schools will be the new normal.

Every parent should be there for their kids to help them make their first step. With just three steps, your kids can start coding in Python and build amazing projects.

Here’s how you get started:

While schools have already integrated Python for their higher classes, your kids can start off at a much earlier stage.

Even though Python’s website is the complete package, you don’t want to hand it to your kids. It is like asking them to go through the Old Testament to learn English.

Instead, coding in Python should be engaging, playful, and competitive to help them hop one step at a time.

When it comes to coding in Python or any other language, communities are the sails that help your kids improve. They can engage with other programmers, ask questions, code together, and build projects in Python.

Before wrapping things up

Educating children on an online platforms is now on another level post-pandemic. Coursera gave away free courses for students and Tinker Coders saw a 200% increase in enrollment for coding courses for kids.

Kids learn faster than adults and coding at school or coding programs after school will be the new norm in the days to come.

Coding in Python is simple, easy, and highly effective for kids to learn and build their careers. There is no better time than now to help your kids learn Python online.

What Hand-on-skills Help You Thrive In Computer Programming?
November 15, 2022

How Short Online Coding Courses Are Beneficial for Kids
October 12, 2022

Take your Coding Skills to another Level with these International Competitions
April 13, 2022